“The greatness of a nation and its moral progress can be judged by the way its animals are treated,” Mahatma Gandhi once said.

If only stray cats and dogs could talk, no doubt they would certainly judge us all. In 2019, the Philippine Animal Welfare Society estimated some 12 million dogs, cats, and other animals to be roaming the streets of the Philippines.

They often end up in city pounds or worse, dead.

Then we know what happened just before the pandemic in January 2020—we saw reports and images of farm animals and pets abandoned and covered in ash during the Taal eruption.

There were no exact figures as to how many animals were affected but there were definitely hundreds of them, maybe even thousands.

Luckily, Susan Lara and her team were able to rescue over 200 animals over three months after the eruption and that’s when Lara’s Ark began.

Lara’s Ark is an animal rescue dedicated to saving the lives of all creatures, big and small in the Philippines

Founder Susan Lara’s love for animals started when she was 15. She would save her allowance or food to take care of her friends’ or family’s animals that needed veterinary care.

“Every time I went abroad, I’d always make it a point to get some food to feed the strays and bring the wounded to the vet.

“Animals in need always seem to find me. Lame birds land on my balcony. When I dive, sharks come next to me to show a hook in their body. Dogs who are supposedly aggressive come up to me to show me their wounds,” shared Susan who has been rescuing animals for over 40 years already!

Even before the Taal eruption in January 2020, Susan had been rescuing one or two animals at a time with her daughter Tammy.

But they decided to open up their rescue operations and adoptions to the public since the impromptu rescue of the animals was affected by the disaster.

“LARA is not only my mom’s last name but also stands for the ‘liberation of abandoned and rescued animals,’” she explained.

The mother and daughter tandem laments many Filipinos’ prejudice against the Philippine dogs usually called aspin or ‘Asong Pinoy,’ the usual breed of stray dogs in the country.

The prejudice against aspins is that they are vile as compared to other “high-class” breeds, but in reality, when they are loved, they can actually be the most affectionate dogs.

One example would be Heart Evangelista’s aspin baby, Panda.

And of course, we would never forget Kabang, our hero dog who is now in dog heaven. 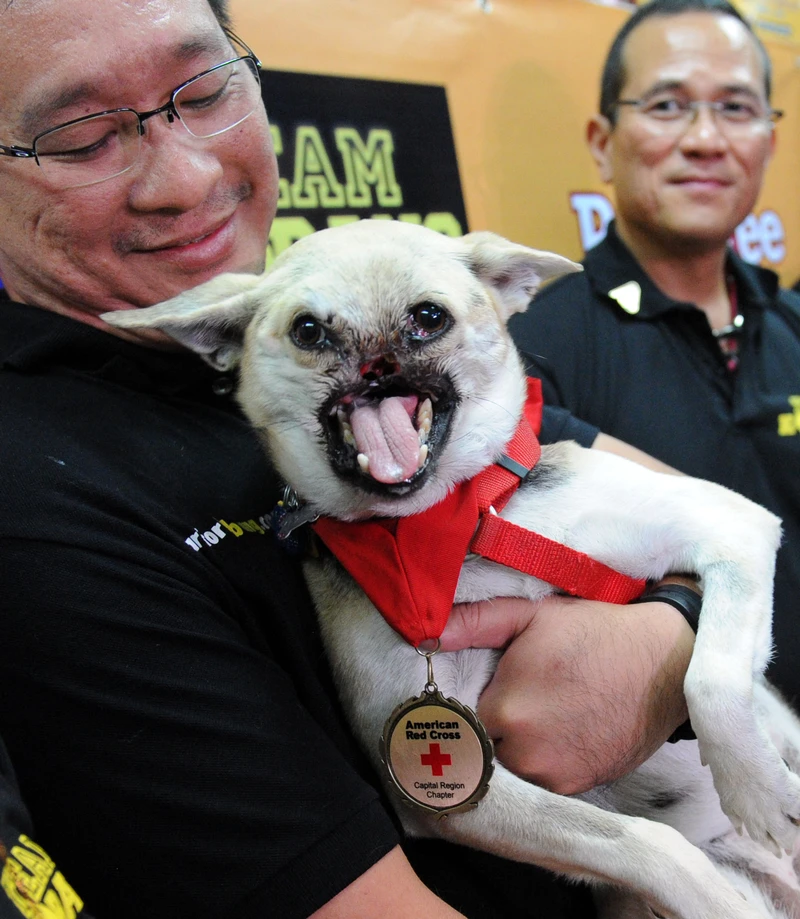 There’s Tiger, Sasha and Speed who are all ready for adoption.

They look very pampered, at peace, and patiently waiting for a new home—this is what sets them apart from other online pet adoption postings.

“A lot of rescue groups post gruesome and graphic photos of the dogs. Although they reflect the reality of what we do, there’s also another reality to rescue: the joy, hope, and resilience of animals, as well as the compassion & dedication of the people who save them. And that’s something we’d like to focus on through our different platforms.

“We don’t want people to adopt out of guilt, but instead inspire them to adopt because of how much love and happiness aspins can bring them,” Susan explained.

The Future of Lara’s Ark

The goal set for their team is to give the rescued animals a second chance and rehome them with loving and caring people who will treat them like family.

Currently, animal-assisted therapy is continuously growing to provide assistance and coping mechanisms to people with special needs, mental health problems, among others. That’s why they are also looking forward to establishing a training center for rescues to be emotional or support animals.

“In the end, I suppose I’d like to go full circle. Our vision is to be more than an animal rescue, but a sanctuary where animals can, in their own way, help rescue humans too,” said Susan.

Want to adopt? Here’s how!

In the four decades of Susan Lara’s rescuing of over a thousand animals, over 500 of them were rehomed and adopted by people who are capable of taking care of them. This includes horses and livestock rescued during the Taal eruption.

As of this writing, there are 60 dogs and 40 cats rescued waiting to find their new loving and caring family!

They have been well taken care of in the shelters of Lara’s Ark—fully vaccinated, desexed, and have all recovered from their medical conditions, as per Susan.

For those who are interested in adopting a pet, you may call 0917-8084-826 for a preliminary interview. After the assessment, you may schedule your visit to Lara’s Ark shelters at 585 Calbayog Street, Mandaluyong or JP Laurel Street, Brgy. Lumbangan Nasugbu, Batangas.