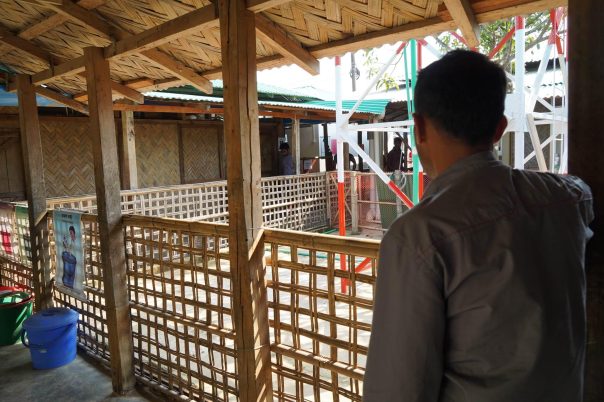 I’ve been living in Bangladesh since 11 September 2017 – I remember the exact date we arrived. I fled with my wife and four children from Myanmar.

We were always threatened in Rakhine. Compared to Myanmar, Bangladesh still feels like paradise. But the conditions here are inhumane. You have to stay in a small room, the toilets are shared, and you live under a plastic sheet with no ventilation. You aren’t allowed to go anywhere, and you can’t work like Bangladeshi people.

In general, the camps are less safe than they were before. Because there is no way to make money, no education and no job opportunities, people are turning to illegal activities to get by. Now there are some extremist groups who kidnap, blackmail and rob people. Unmarried women and children are targeted by human traffickers. If someone doesn’t like you, they can ask a gang to kill you. People with small shops or who volunteer with NGOs are able to make some money, and that turns them into targets.

Right now, people are really worried about rumors that there will be a fence put around the camp. If this happens people won’t be allowed to move from block to block; you will only be allowed to move to other blocks if you show your ID. Mentally, people will not be well. Fighting and unrest in the camps will only increase.

When it comes to returning to Myanmar, people here are worried that it will be the same as in 1992, when the Rohingya were forced back. We know the situation now is not like 1992 but people are still worried. What would we do? A couple of days ago I was in contact with people still in Rakhine. They are watching us here in Bangladesh closely. The collective fate of the Rohingya is in our hands, they say. If we get justice here, they feel we will get our rights there. But if we return like before, we will all be in danger. It was difficult to hear that. We don’t feel safe. We hope the Bangladeshi government will not put this pressure on us.

Many countries did not even hear about the Rohingya before this influx. People did not know about the violence that was happening to us before August 2017. We were not allowed to use smart phones in Myanmar, so we weren’t able to communicate about our situation with the world.

This time last year, many NGOs and media were talking about our fate. Now the attention has diminished and maybe next year the interest will be even less. If it continues this way, it is possible that in a few years the Bangladeshi government will get bored and send us back.  We keep hoping that the international community keeps an interest. We know these things takes time to resolve.

Being Rohingya is an ethnicity, but in Myanmar they call us kala, or illegal migrants or Bengali, as if we are from Bangladesh. The Myanmar government has asked people to apply for the National Verification Card (NVC). After having this card for six months, they investigate you to determine whether you get citizenship or not. The first question on this form is: “When did you come from Bangladesh”, followed by “Why did you come” and “Who was the chairman in your village in Bangladesh?”

How can we answer these questions? It means they are automatically putting us in a cage. This is why people are not willing to go back. If we go back, we will be forced to go through the NVC process, be forced to apply for citizenship. It’s like putting your legs in the fire. You have to be able to show identity cards from both sides of your family for three generations – how can you keep ID cards for three generations? Especially when the Myanmar government asked for many documents to be returned to them in the past. We have deliberately been left with no documentation whatsoever. When they burnt the villages, what remaining documentation people had was burnt too.

I do not anticipate being able to return within five years, so I am preparing myself to be here for longer. If we have to stay here for a long time, I would like the Rohingya to benefit from education, security, refugee status, better access to secondary healthcare, and employment. Ultimately, we are seeking justice. We want the right to citizenship, free movement, education, secondary healthcare, and freedom of religion, just like other groups in Myanmar. We are destroying our children’s generation. Children should be in school, but there are no schools for them. I look at my children and other children – the future generation. If they stay five or six years here, they will be unable or unwilling to go back to school. The longer we stay here, the more children will be lost.

Metun (name changed on request) is a Rohingya refugee from Rakhine in Myanmar who now lives in the Kutupalong-Balukhali megacamp in Cox’s Bazar, Bangladesh. Metun volunteers with NGOs in the sprawling refugee camps in Cox’s Bazar.