It was a Sunday treat: a gentle tropical breeze skimmed over the glassy waters of Nosy Be, at the north-west tip of Madagascar; there was barely a cloud decorating the picturesque island. It was a good day to explore.

I wanted to learn from locals about Malagasy reality and how they build their lives from the ocean — perhaps something in common with me, as I’ve been working at sea for sixteen years. Paddling out in our kayaks, we hoped to strike up a morning conversation with the local fishermen about their way of life. 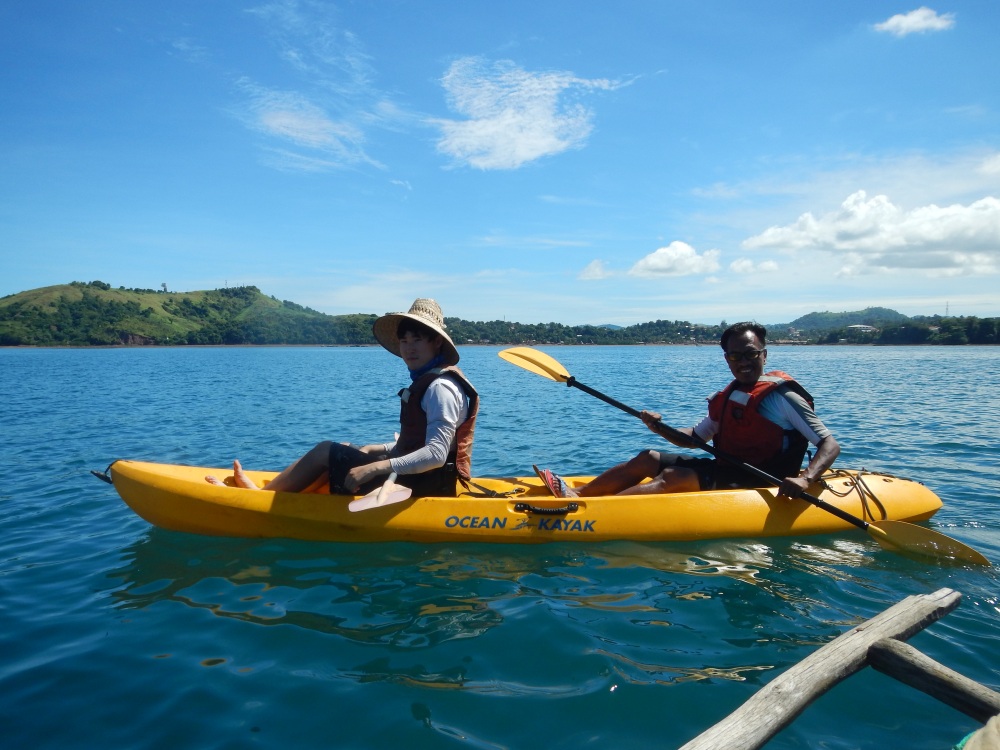 Paddling at sea with my crew mate.

Squinting into the morning sun, I could make out a fisherman in a canoe. My crewmate Seom Gyun and I paddled towards him. His name was Dudu. He’s in his mid-thirties and his face was beaming as we approached. He wished to sell his catch but was embarrassed to say; four hours after dropping anchor at sunrise, he only had a few fish. I smiled back, suggesting we pay to share his bounty and cook them together in his favourite style at his home.

Surprised by the gesture, Dudu called over to another fisherman to ask if he had more. The second man was called Lilatse –– younger than Dudu by about ten years. Lilatse had caught more than Dudu but his catch was for his family waiting on land. We invited him to join us later anyway.

Back on shore, Dudu showed us around the wooden floors, bamboo slats and coconut leaf roofing of his typical ‘trano’ (Malagasy for ‘house’), which he built with his own hands 15 years ago. His walls were decorated with certificates from his time working on foreign fishing vessels. As he cleaned and prepared his catch, he told us stories of his ventures out to sea.

“We are here for research,” I said, vaguely, when Dudu asked what we were doing in Nosy Be. ‘Expose… Thai Union… Bycatch… Replenish…’ –– these were the words that jumbled in my head but my hands turned to helping prepare Dudu’s catch.

The tondro – a small fish – was filled with garlic, pilipily (a Malagasy chili), salt and tsohafohyi, a native Madagascan lemon. Lilatse arrived, happy that he had fed his family and gladly accepting his drink – but still incredulous at the sight of Seom Gyun and I sitting in Dudu’s trano, he refused to be called ‘Lilatse.’ “John Wayne, okay,” he requested. I gave a nod and a tap on my chest: “John Wayne,” I agreed.

The Tondro Firiry, a Malagasy name for fried fish, was served with French bread and salad. Dudu was still feeling guilty, insisting he could have paddled out earlier in his lakana to catch more for us to eat. “I am sorry for the few fish today,” he said.

That was my cue. I told him what we were really doing in their waters. He listened intently as I told him about our search for FADs (Fishing Aggregating Devices) and how we were dismantling them. I told him we wanted to help replenish lost marine life and, hopefully, help people like him preserve the livelihood that is slowly dying due to destructive industrial fishing. “Good,” he said, as he turned the tondro over. We may not have brought him a greater catch today, I thought to myself, but I was glad he understood we shared a purpose.

Around 3pm, the tide rose by about four metres. Dudu’s lakana was tied up almost 100 metres away to the jetty and he paddled out with John Wayne to escort us. As we said our goodbyes, Dudu and John Wayne called me ‘Ralahy’ – Malagasy for ‘my brother.’ I paddled back to the Esperanza more determined than ever to help stop the plunder brought about by companies like Thai Union that starves Dudu of the full bucket of fish that he deserves.

“We must make life easier,” Dudu had said earlier. When I think of him setting out in his tarakan under the ‘maswandro’ (sun), or the ‘fanjava’ (moon) and ‘zavono’ (stars), I can’t help but agree.

Eric Bangad (left) is a Filipino environmentalist who is the bosun on board the Greenpeace ship M/V Esperanza. He has recently visited Madagascar for an official mission and he previously sailed the Pacific Ocean to chase an oil rig that was on its way to the Arctic Circle. Read more of his articles here.